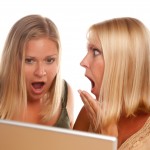 We have all been there before, felt a strong emotion whether it be anger, sadness, or shock, and instantly updated our Facebook status without even thinking about it.

Some of us may even then regret it, but feel too embarrassed to delete it because others will see, and then that will look even worse!

What a dilemma, hey?

But now, there’s more to worry about than just that.

Mashable reports that ‘New research has found that Facebook status updates are more memorable than lines from a book or the faces of strangers’.

“We were really surprised,” said Laura Mickes, visiting scholar at UC San Diego and a senior research fellow at the University of Warwick.

“These kinds of gaps in [memory] performance are on a scale similar to the differences between amnesiacs and people with healthy memory.”

This new research goes against public perception that Facebook is just filled with a load of nonsense and cat pictures alike, instead revealing just how important it may be for what is stored in your memory.

“Facebook is updated roughly 30 million times an hour, so it’s easy to dismiss it as full of mundane, trivial bits of information that we will instantly forget as soon as we read them,” Mickes said.

“But our study turns that view on its head, and by doing so gives us a really useful glimpse into the kinds of information we’re hardwired to remember.”

“Not only is the ‘Facebook effect’ on memory strong, but we replicated the effect each time we examined it,” said Christine Harris, a psychology professor at UC San Diego.

The reason why our Facebook posts are more memorable than books and faces could be down to a number of reasons, yet the researchers say the main reason is that the way we express ourselves online is a very similar way to how we talk.

“One could view the past 5,000 years of painstaking, careful writing as the anomaly,” said Nicholas Christenfeld, a psychology professor at UC San Diego.

“Modern technologies allow written language to return more closely to the casual, personal style of pre-literate communication. This is the style that resonates, and is remembered.”

What do you think? Can you remember yesterday’s Facebook updates easily?

Or do you only remember the funny or ‘Wow, I can’t believe you just posted that status’s?

Let us know in your comments below!